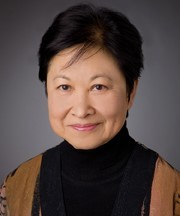 On October 19th, Civic House was pleased to present its third annual Alvin Gutman Public Scholar Lecture with guest lecturer, Dr. Nadinne Cruz, in the Bodek Lounge of Houston Hall. For over 25 years, Nadinne has been a practitioner, leader, advocate, speaker and author on the need for improved community-engaged learning practices in higher education. Her early volunteer experiences with peasants in the Philippines and her Filipina-American immigrant consciousness of domestic and international issues continue to inspire her work in education. She is the former Director of the Haas Center for Public Service at Stanford, where she developed the Public Service Scholars Program that integrates service with senior honors thesis research, taught service-learning courses for the Program in Urban Studies, and, for 7 years, lived with students as Resident Fellow of the Okada Asian American Ethnic Theme Undergraduate Residence. Prior to Stanford, Nadinne served for 10 years as Executive Director of the Higher Education Consortium for Urban Affairs (HECUA), where she led 18 colleges and universities in the Upper Midwest to develop community-based learning programs throughout the country and around the world. As Eugene M. Lang Visiting Professor of Social Change at Swarthmore College, Nadinne piloted service-learning for the political science department's Democratic Practice Project. Now an Independent Consultant, Nadinne works with a variety of colleges and universities, while continuing with active mentorship of emerging educators and leaders in the field.

Nadinne arrived to Penn a couple of days prior to her lecture, enjoying the campus and attending several meetings with Penn faculty, staff, and students. Several students from the West Philadelphia Tutoring Project, the Alternate Spring Break Program, and Civic House work-study students attended a breakfast with Nadinne the morning of the Gutman lecture; they were able to interact with her on a more personal manner and learned about the different types of service programs offered at other universities.

At the Gutman lecture, Nadinne was introduced by Jamie Ye, a College sophomore on the premedical track studying biology with a minor in Chinese language. Exploring the topic of Centering Communities in Search of Moral Brilliance, Nadinne spoke of tying the threads of different communities together. In particular, she spoke of the importance of students avoiding a sense of social justice elitism and recognizing one's positionality in performing service work, keeping things accessible, and acknowledging that there is no single solution to injustice. Nadinne inspired the audience with her story, recounting her experiences growing up in the Philippines, as well as with family trauma and depression. Her story serves as an invaluable model of perseverance, leading a life full of love and compassion, and service to underprivileged communities.

*Video of the lecture coming soon!