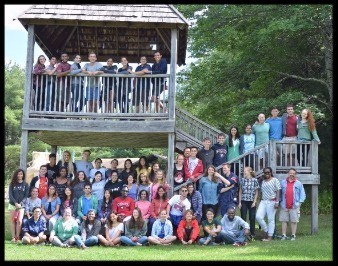 At the beginning of this Fall 2016 semester, students from all of Penn's undergraduate schools of all different majors and concentrations gathered at Civic House before departing for the all-weekend IGNITE Retreat off-campus in the Pocono Mountains. More than 60 students, all representing one or more of Civic House's programs (West Philadelphia Tutoring Project, Alternate Spring Break, PennCORP, Civic Scholars, Civic Engagement Interns, and Student Staff), united under the common goals of the retreat. Civic House's second annual IGNITE Retreat began with aims to foster a vibrant community, discovering, exploring, and igniting a passion for social justice, and building the tools necessary for responsible and reflective engagement. The students were encouraged to openly express their opinions regarding a variety of social justice and identity-based topics, speaking their own truth and listening to the unique perspectives of those around them. Students of the Civic House community were asked to reflect on themselves, their goals, and their work, while also evaluating how they can improve on meeting Civic House's Social Justice Framework and Theory of Change mission statements

The IGNITE Retreat had a number of breakout sessions led and designed by both Civic House staff and student leaders. The breakout sessions covered a wide range of topics relating to the lives of student activists and social justice. The students were able to choose between a number of breakout sessions that were occurring simultaneously, such as session topics on healing justice, gentrification, being an active bystander, the relationship between Penn and West Philadelphia, community organizing, and racism in the workplace. The weekend was full of intense conversation about important socio-economic and social justice issues, relationship and community building through Civic House, and valuable peer-to-peer learning.